That was a fun day out.

It was hot. Very hot indeed. There were many runners in the medical tents on the way round, and I saw 3 keel right over whilst running in the first hour…scary stuff. And there were simply loads of fit, well-trained runners reduced to walking.

All my training was for a target time of under 3h45. But you never actually a marathon at that pace in training: I had done 20 miles in 2h55, and a HM in 1h50, neither of which broke me. I knew I had to aim for a slower time because of the heat, and I did a bit of googling, and found various calculators suggesting that 21 degrees would add 5 to 25 minutes to a marathon time. Hmmmmmmmm: maybe for the elites, it does!!

Anyway, thinking that it was still quite cool at 10am, I set off at a sub-4 hour pace (ok perhaps a bit faster: 53 mins for the first 10k), and I was enjoying myself, high-five-ing the crowd, loving the bands, and soaking it all up. When I slowed to a walk after an hour to take my second gel, I realised “Oh….I seem to be a bit wobbly”. So I slowed down to a 5m50/km (9m20/mile) pace (reaching 15k after 81minutes), but by mile 10 my body gave up, and I had to start walking.

Miles 10 to 23 were spent walk-running. I started by having just one walk break per mile (and when it did, I was averaging 6m50/km (11min/mile) including the walk breaks), although I had a couple of prolonged breaks in the shade to stretch out. This lasted until mile 20, after which I was having 3 or 4 walk breaks each mile. This was so frustrating! People would shout “Go Mike Go!” (it was written on my shirt) so I would start running, but then find my head was spinning again, so I would stop straight away (as I had no desire to end up in a medical tent).

I had a bad stitch from mile 21 to 25, but I managed to run (almost) all of the final 3 miles, although by then I was down to 7min/km (11+ min/mile) without walk breaks. At this stage, the noise of the crowds was just terrific; there was no chance of hearing your name: it was just a wall of noise.

With a very slight speed up at the end, I finished in 4h43, an hour slower than I had trained for since the start of the year. Even then I had to lie down for 30 minutes thinking that I was going to be sick, and with bad dizziness…like the worst hangover ever!  You can see how badly it goes wrong by looking at my splits on Strava (warning: contains a rude word) here.

On past long runs, I am used to sore feet, quads, glutes and abs. I had those, but less than usual. I got a pain to the out side of my left knee at about mile 15, which did hurt and was limiting the movement in that leg. My feet were really sore. And I have no idea what was going on with my stomach. It certainly ached for most of the race. I felt like I had drank loads of water, but my mouth was always dry. And about miles 15-20 I got the serious munchies (although this could be because I carried enough gels only for 3h30) and was necking lucozade, and grabbing orange segments wherever I saw them. Nothing seemed to make a difference. Did I drink too little? too much? Eat too much? Too little? Who knows!

With 24 hours of hindsight, I’m a little annoyed that I didn’t REALLY lower my target pace given the forecast temperature (the internet was a spectacularly useless source of advice in this respect), and I am frustrated that the heat got to me, and I am still surprised and a little disappointed that I just could not make myself run at all when it got tough.

On the other hand, finishing yesterday without needing medical assistance is impressive enough (hare and tortoise style, my brother-in-law ran hard for about 17 miles, then needed medical assistance, and ended up finishing 15 minutes behind me).  And it was the hottest London marathon ever. It was brutal.

I am now a marathon runner.  It was by far the hardest thing I’ve ever done. I guess that’s the point, right?

Here are some photos! 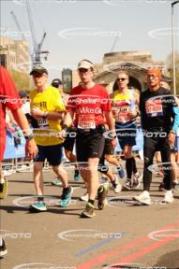 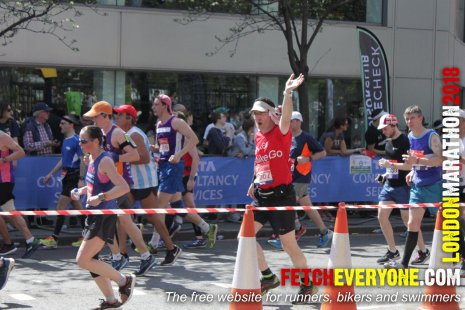 View all posts by Mike Brewer